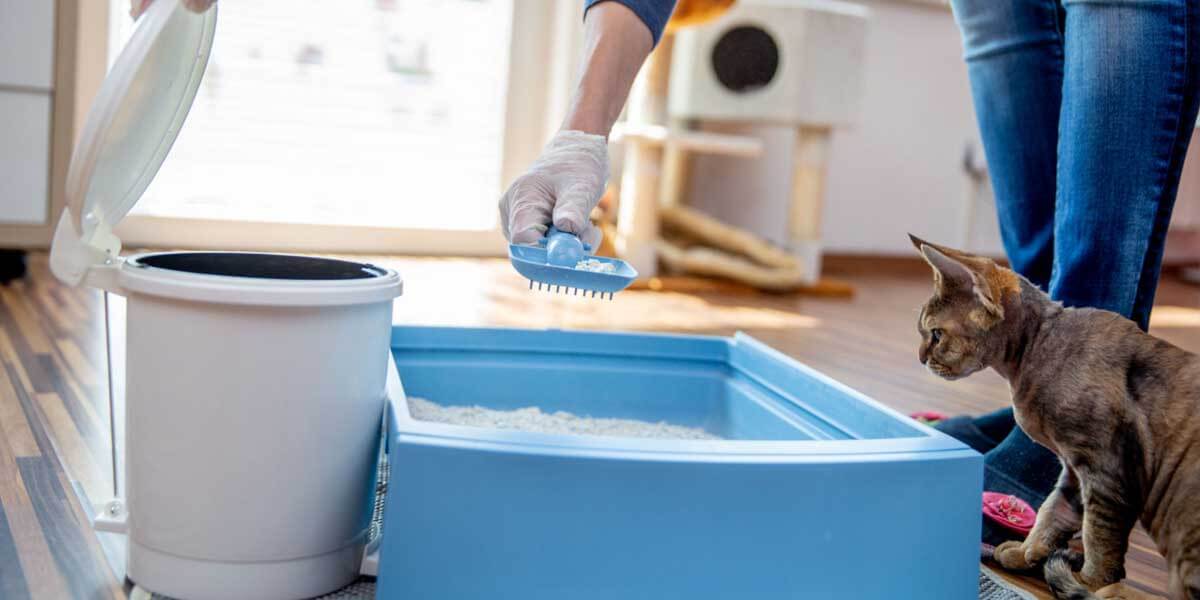 Knowing how to dispose of cat litter is a requisite part of being a feline parent. No matter how much you enjoy your cat’s presence, virtually nobody actually looks forward to dealing with a litter box, or training a kitten on how to use said box.

However, knowing how to dispose of cat litter properly is entirely a different issue. You wouldn’t believe how many disgusting stories I’ve heard about cat parents flushing litter down the toilet. I’ll later elaborate more on why that’s a terrible idea.

To make sure you know the ins and outs of disposal of used cat litter, I will expand on the types of litter, how to dispose of each one, and what could happen if you don’t do so in a safe manner. Let’s get you up to date on the wonderful invention that is cat litter!

Are you litter literate? That is to say, are you conscious about the litter your cat uses or are you simply happy that your cat doesn’t have to go in sand or sawdust?

There are so many types of cat litter available on the market that it’s honestly a crime to not make use of them. To understand various ways of disposing of cat litter, let’s give you a refresher course on the types of litter most popular nowadays.

Arguably, this is the most popular sort of litter that dominates the market and hearts of cat owners. Clay litter is usually of the clumping sort and cats prefer this feature.

However, take note that this type of litter cannot be composted or flushed down the toilet (unless you want to clog the toilet and pipes). Clay litter produces ample dust, so while scooping, make sure to wear a mask and to be safe, a pair of gloves.

This sort of litter is relatively new and well on the way of gaining popularity. Silica gel absorbs smell and moisture, and crystal litter also does not produce a lot of dust. That’s why some people prefer crystal litter over clay.

Keep in mind that crystal litter also can’t be flushed, whether it is clumping or non-clumping. They cannot be composted. And you should be careful that your cat does not ingest this litter.

While clay and crystal litter mostly dominate the market because of their superior ability to control odor and moisture, they are most often not biodegradable, flushable or compostable. This is why people who have a green mindset look for other options.

There are some litters that are recycled and have biodegradable ingredients. First of all, you can use litter from recycled newspapers: it’s something you can make at home as well. Litter made from pine or corn is another sensible choice. Some of them are even soft enough that they can be flushed.

However, you should never flush a whole litter box’s contents at once. Also, definitely look into your city’s waste water treatment system before doing so, because most systems do not deal with cat parasites that can infect humans too.

Other biodegradable choices include coconut coir, wheat, grass seed, chicken feed or even traditional options like sawdust or soft wood chips. The most sensible way to dispose of kitty litter that is biodegradable, is to compost it. But only for flower or ornamental plants and never for edibles.

Your cat may have preference towards a specific type of litter and it could cause litter box problems. Try a few when he’s a kitty and find out which he fusses the less about. Of course, their preference can change later due to environment, illness or old age.

Also Read: How Long Can Cats Go Without Water – Excellent Tips and Tricks

The Best Way to Dispose of Cat Litter

No matter what kind of litter you use, biodegradable ones or the ones laden with artificial ingredients, I would advise you to just dump it in the trash. That way, you can avoid the headache of whether the cat litter is taken care of safely. While you’re dumping the litter in the trash, you need to maintain some points:

Now, you may wonder why I’m not advising you to dispose of cat litter by composting it on the occasion that it is biodegradable. The answer is, it’s an intricate process, and you might cause more harm than good while trying to compost cat litter.

What to Do With Cat Litter That Can Be Composted

Yes, cat litter made of biodegradable materials can, theoretically, be composted. If you’re adamant that you want to give this a go, then who am I to dissuade you? I will aim to give you pointers on composting cat litter.

If being environmentally conscious is your goal, composting your cat’s litter isn’t the only option. Aside from using biodegradable litter, you can use litter that comes in a recyclable package, use a steel scoop and litter box, donate your old box and scoop to a charity, etc.

Everyone should be thinking about a sustainable way of taking care of their cat’s litter. But in case that’s not on your mind and you just want to get rid of the litter with minimal headache, you can always invest in a self-cleaning litter box.

Generally, these boxes do the stirring and scooping of litter automatically so you don’t have to get your hands dirty. There are also litter trays that can be inserted into these boxes and then just taken out a couple days later and be dumped as a whole, into the trash can.

Even though these options might be wasteful, you wouldn’t need to sift through litter yourself, thus reducing your contact with the litter and possible contamination. This is actually a good option for immunocompromised people.

Litter-borne parasites: What lurks in your cat’s feces: Sounds like the title of a horror movie, right? Well, when you learn how you can get sick from your cat’s litter, this title would seem apt.

There is a protozoal parasite called Toxoplasma gondii that’s frequently present in cat feces, that’s capable of making a human sick. If you’re a healthy person, the symptoms of T. gondii infection might not manifest.

Experts warn that pregnant women, children, people with HIV/AIDS, and people undergoing chemotherapy should refrain from going anywhere near cat litter. In fact, outdoor cats sometimes defecate in sandboxes in children’s playgrounds from which contamination might occur. So you should be weary of letting your child play in one of those.

For the same reason, you should wash your hands thoroughly after working in the garden. Keep your own cat indoors, so they can’t contaminate the groundwater. Wash them with a good cat shampoo when needed. What are the consequences of getting infected by T. gondii, you ask?

Mayo clinic states that in a healthy person, the symptoms may be innocuous. Such as head and body aches, mild fever, tiredness, and swollen lymph nodes. However, in immunocompromised people and children, the symptoms are more serious. And this infection can transmit from a mother to the child in her womb, as well.

Now, did we learn how to dispose of cat litter in an appropriate manner? To sum it up, no flushing litter down the toilet. Practice caution while scooping and stirring the litter box to keep yourself and your cat healthy.

Composting is okay, but not near edible plants, and definitely refrain if you live near major water bodies. Throwing used litter in the bin is the easiest, most sensible option. Also, don’t punish your cat if it doesn’t use the cat litter and instead look for reasons behind this behavior.

One little tip I want to add is that, if you want to compost your cat’s litter, make sure you’re feeding him homemade or at least organic food. Most store-bought cat food contains too much artificial ingredients and could be bad if you’re planning on composting the cat’s litter.