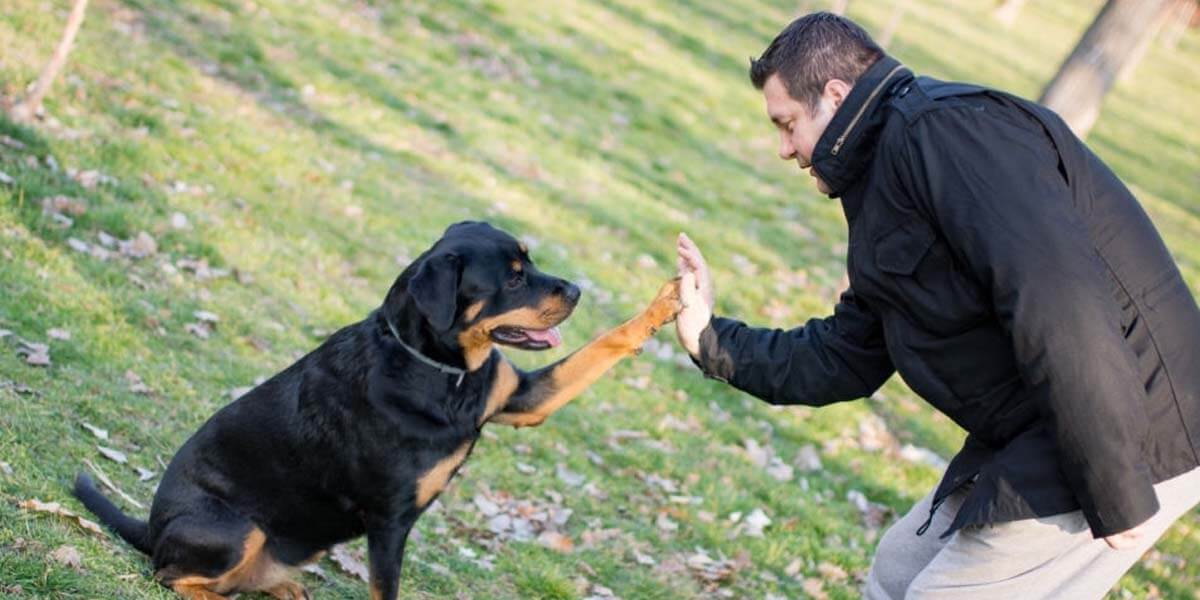 When one first thinks of adopting dogs, rottweiler is seldom the first breed they think of. This dog breed has garnered some bad reputation over the years, so even avid dog parents are apprehensive, mostly because they’re not sure how to train a rottweiler into being docile.

However, it’s actually better that a first-time dog parent doesn’t adopt a rottweiler. Because they’re more suited for people who are well versed in dealing with dogs in general. If you’re an experienced dog parent, only then would I suggest you adopt a rottweiler puppy.

Adopting a puppy means raising him to be a good dog, and rottweilers are not exempt from that rule. But before we learn all about rottweiler training tips, you need to know some basic things about rotties.

Things You Should Know Before Attempting to Train a Rottweiler

First of all, you need to consider if you’re a good choice as a rottie parent or not. Do you have experience handling and training dogs in the past? If so, you will find it moderately easy to train a rottweiler. If you have no experience with dogs, maybe pick another breed to adopt.

Also, keep your household in mind while deciding to adopt a rottweiler. They don’t get along well with other pets, and they might be too protective of any children in the house, so much so that they might get defensive when other children get a little rough during playtime.

Second, rottweilers are prone to some health problems, mostly joint issues. You need to get your rottie diagnosed early to make sure your dog wouldn’t be in pain while going through training.

Third, you should start early to properly train a rottweiler puppy. In fact, you can even start as early as 6 to 8 weeks of age. Admittedly, at this age they have the attention span of a teaspoon, and their energy also runs out quickly. So you might have to conduct short, daily training sessions for a few weeks.

Also, for that same reason, start with simple commands like teaching their names, sit, stay, bark, keep quiet and the like. Keep in mind that rottweilers were originally herders, and they’re often trained to be guard dogs nowadays.

This is because this breed is the happiest and healthiest when they’re given a ‘job’. In case you don’t want to train your rottie for guard duty, make sure to teach him lots of tricks and indulge in ample playtime.

Let’s get straight to learning some tricks on how to train a rottweiler puppy. Like I said before, you can get them started fairly young. If you don’t mind compensating for the short attention span with long weeks of training. Patience is a great virtue, especially while training any dog, including a rottie.

They’ll try to win you over with cuteness, but you need to be firm in making them understand the rules. Remember, training them later in life (when they’ve picked up bad habits such as nipping at your fingers) is going to be much harder. While you’re teaching them basic commands, don’t ever physically punish them. No yelling, either. Use a firm but calm voice, and positive reinforcement to train your dog.

Start your rottweiler pup training by teaching him his name! Prepare some small treats, and wait for your dog to get engrossed into something else. Call his name in a cheerful tone, and as soon as he turns to look at your, give him a treat!

Keep this positive reinforcement training up till your dog responds to his name in a jiffy! This is the first step of training, and this makes future training exercises easier for both of you.

Rottie puppy training, in fact any pet training is incomplete without housebreaking, which is also frequently called potty training. I guess I don’t have to tell you any more why housebreaking is important, do I? No one wants to deal with a puppy that poops and pees all around the house.

Potty training is an essential part of raising a rottweiler puppy, and you should start this as soon as you bring him home, no matter how young he is. In fact, before taking him inside, you could let him sniff around the place in the yard that you’ve designated as his potty space!

Puppies cannot hold their poop and pee for too long, so you should take them to the designated ‘toilet’ spot 15 minutes after each meal, and also once every hour. Try doing this once every four hours at night. To make this process easier, refrain from free feeding, even water.

Don’t leave the water and food bowl in the crate, this way you can track when he needs to potty. Even when trained, you shouldn’t practice free feeding a rottie as they tend to over-eat and get obese. You should make sure accidents don’t happen in the house. As soon as you see signs of going such as digging or fidgeting, take him outside.

Once your rottie is a bit older, you can even train him to go potty using a clicker, a verbal command or a useful gesture, or even all three of these. Remember, never yell or hit your rottie if he has an accident. Make sure to clean up the mess, and reward him with praises and even treats when he does potty in the designated area next time.

I’ve remarked before about rottweilers being unsuited for houses that have other pets. So how to train a rottweiler dog to be more tolerant to other pets? They’ll meet other dogs at the park or during their walk, so you need to teach them to be social to prevent any unwanted situations in the future.

Taking steps to socialize your rottweiler is as easy as a vet visit. From there, start introducing him to more humans and pets. This is best done at 12-13 weeks of age. Once your dog is vaccinated, you can let him meet your friends, family, neighbouring kids (under careful observation).

You can also let him play with other vaccinated and friendly dogs. Lastly, remember to keep an eye on your rottweiler puppy to see if he’s uncomfortable in a specific situation or around certain individuals. Absolutely do not force him to remain in a situation where he’s not happy, and take things slow.

Crate training a rottweiler puppy really isn’t the punishment you’re thinking it is. Teaching a puppy to stay in his crate can be a positive experience and he can learn to regard the crate as a safe space for himself. For the record, don’t use the crate as a cage to punish him when he’s misbehaved.

This’ll make him intolerant of being in the crate and ruin the crate training. Crate training and potty training goes hand in hand. While you’re teaching him to stay in the crate, you also need to make sure he doesn’t potty into the crate. That’s going to turn into a bad habit real soon.

Slowly but steadily teach your puppy that the crate is where he should be sleeping and relaxing. Even if your rottie pup falls asleep on your lap, pick him up and put him to sleep in the crate. As a bonus, to make his crate a happy place, incorporate it into playtime with your rottie.

Throw treats and toys inside, hide them around the bedding and of course, make sure his bedding is comfortable! Once your rottie is crate trained, travelling with him in the crate is going to be so much easier. You can also leave him in the crate when you’re not in the house for a while. But don’t be gone for so long that your rottie ends up soiling the crate.

Training a Rottweiler Doesn’t Have to Be Hard!

From now on when you think of how to train a rottweiler, I hope you think back to this blog post and follow the tips accordingly! Remember, training a rottweiler is like training any other dog if you just keep a few things in mind.

Rottweilers are quite intelligent, powerful and energetic dogs, and when trained right, they’re going to be delightful companions as long as they live. Make sure to check for any health issues before you start training, and start as early as you can.

In case you start feeling the task too difficult, don’t forget to get help from a trainer who specializes in rottweilers. Spending a bit of money isn’t much of a price to pay in return for a docile companion!